I had dreamed of the Dirty Dozen Bike Race and the opportunity to test myself on the 13 steepest hills in the city for a long time. I had imagined myself a decent climber or at least thought I was at one point. And after years of searching out the steepest pitches in several counties and conquering them all with gusto; frankly I was a bit cocky. I had ridden just about every back road up and over Laurel Ridge and out of the Comemaugh watershed and figured anything in the city limits had to be tame by comparison. There is no way that this event could possible live up to the hype. Holy gravitational pull, had I severely underestimated the absolute and utter beat down racing those 13 hills in a day can inflict.

Luckily, I had been coaxed into doing some training rides by Gene Nacy of www.cyclingfusion.com . Unfortunately, I didn't get to do many with him. So I explored some of hills on my own until I met Birk McGilvrey, who would become my personal tour guide for several weekend recon missions. First of all, let me tell you, these hills are NO JOKE. Sure Center Ave is just a long grunt. Sycamore is more of a long slow grinder. But DAMN…the first time you see Canton, it is hard to imagine that a bike can be ridden up that thing. 37%...Come on! People fall off their bikes and SLIIIIIIDDDDEEEE  down the hill on the cobbles. Frankly in my opinion Canton doesn't even make the top 5 as far as difficulty goes. That is as long as you have access to the right line; but more about that later.

Race day arrives with much anticipation. For better or worse, 300 or so other people think that riding all over Pittsburgh, seeking out the toughest climbs, when it's 20 degrees outside, is a good idea too???? My very good friends Bruce, Sheila, Jack and Pat have offered to give up their Saturday while  fighting hypothermia to cheer me on. I cannot explain how critical their cheers were to me completing this epic adventure.

The race begins and it becomes quickly apparent, to even those with lofty if not realistic goals, that there is a very distinct pecking order in the DD.  Of the 300 or so racers only 30 have any chance of scoring points, which are awarded to the top 10 finishers on each of the 13 climbs. I would guess that at least the bottom half of the field have little to no chance of being a true finisher, which is defined as summiting all 13 climbs cleanly. That's right. No foot down, no circling back, no stopping. The remaining racers are also pretty quickly segregated by those who are just hanging on for dear life and want to try to  finish,  and those who want to beat a couple of their buddies to the top of one of the climbs for bragging rights or beers and those who might want to show their oats on a couple of the climbs. 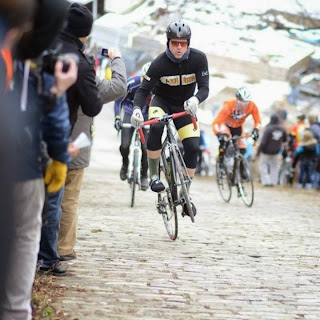 After building some confidence on the first couple climbs and finishing in the top 30-50, I figure I'd take a little poke on Sycamore. I had been trying to stay near the lead going into the hills, mostly to  avoid getting trapped behind slower riders, or those who had fallen. So when the whistle blew on Sycamore, I hopped out of the saddle and threw in an "attack". I now know what a mosquito feels like when he tries to take a bite out of an elephant's ass. Ian went past me like he was going downhill and I was going up. It was amazing. Then Steevo, Bob, Gunnar, Dahn…..and 30 more. Ahhhh dreams of glory….SQUASHED! Holy CRAP those guys are fast! 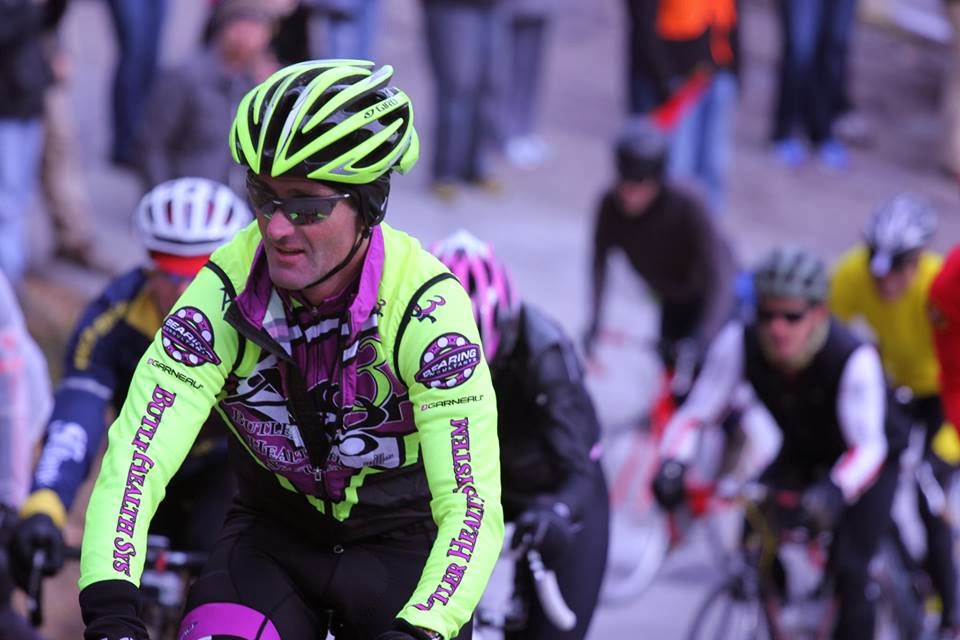 Next up is Canton,  the most anticipated and hyped climb of the day. Anything can happen. Well not anything, mostly just bad things. Not only is this sucker 37%, it is also cobbled with dirt and moss on the stones. Traction can only be obtained in a VERY small corridor up the right hand side. Get caught behind someone who falls and your odds go from small to infinitesimal. My plan is to tag onto the lead pack and once they all clear it, I will have smooth sailing ahead of the masses and the inevitable crashes. Danny blows the whistle WAY early which signifies the race to start each of climbs. I'm right where I want to be. The acceleration is brutal as the elite riders on the Eastern Seaboard sprint up the gradual rise that leads to the true severity that is Canton. I'm gapped as expected, but I have also dropped most of the field behind me. There are maybe 20 riders ahead of me; all fighting for the best line and to be crowned King Canton. I am about to hit the steepest pitch when the unthinkable happens. Half of the lead pack are down and spread out all across the road. Some of the best bikers in the region are spread out on the ground like a group of first time ski school students. People rolling and tumbling. Bikes sliding. Crap there is NO place to go. I kind of soft pedal/track stand right at the brink of the pitch and hesitate while riders scramble to get to their feet and politely try to get out of the way. A rider tears past me with tons of momentum and the throngs are on his heels. Now is my chance. I go. I am progressing up the hill exactly where I want and need to be. Sure having a little momentum would help, but on this line I KNOW I can make it.  About 1/3 of the way up the guy who screamed past me goes down in heap and in now laying prone. Him and his bike are perpendicular and blocking the only clean path to the top. F*&K! I do not want to go to the bottom and try again. I want this. My only escape is left. That is the one place that you do not EVER  want to be on this hill. Dead man's land. I feel my rear wheel slip, as I try to fight my way over some of the mini tombstone cobbles, that over the years have been pushed out of the ground and now face down hill like tiny sharks fins. I can only focus on keeping the bike going forward and maintaining traction on the rear wheel. The roar of the crowd is deafening, but I do not hear it. Later on I ask my friends why they missed Canton because I never saw them. The video proof of Sheila screaming for me, less than 5 feet from my head, is a testament to the tunnel vision and absolute concentration I conjured to get me to the top. I did not hear the cheers, but the shear spirit of their encouragement got me to the top in what I believe was a top 15 spot. That feeling will be as close as I will  ever come to understanding what it's like to ride the Alpe d'Huez during the Tour De France!

Many thanks to Danny Chew and the volunteers for running and organizing such and amazing event and to my support crew. I'd still be out there trying get up Canton if you hadn't been there to lift me up with your spirit!