I'm a little odd. This isn't a newsflash to just about about anyone who's spent any time with me. I'd rather be in the snow than at the beach. I'd rather play a sport than watch one. I like to suffer. Yeah I'm weird. But occasionally there is a justifiable reason for my apparent madness. Today was no exception. I ran a mile this afternoon wearing these. I have been studying...well more experimenting with barefoot running and emulating a barefoot stride when running with shoes. It's been pretty amazing. I've been messing with it for over a year now and I'm continually amazed by the great reduction in discomfort I have while running, the better recovery times and oh...I'm significantly faster. So in an attempt to hone my skills, I regularly run barefoot on the padded track at the local high school. Problem is that even though the track is padded, running any distance wears the skin right off my toes. Nice smooth feet for a bit, but then it starts to hurt some. So in walks these shoes. Walks in. Get it? I think that's funny. Weird right? Anyhow, I've been running a little bit on the treadmill with these Vibram Five Fingers Shoes. Really they are more like gloves than shoes with a thin rubber bottom and no padding. But today was the first time i actually ran outside with them. Surprisingly good results, They felt really smooth, comfortable, and took the abrasiveness out of running on a rough surface while still giving that barefoot feeling. I'll keep playing with them and let you know how it goes.

Now we'll just have to see how bad I hurt tomorrow.

Anyone interested in barefoot running, take a look at www.evolutionrunning.com
Posted by Pale and Scrawny at 4:46 PM 3 comments: 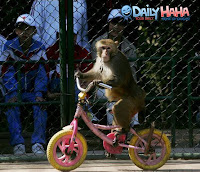 Revisiting a race recap from a while back.

WARNING: This article is not intended for minors or for old folks with weak constitutions. Read at your own risk!

I just completed the Wilderness 101 mountain bike race, a 101 mile mountain bike odyssey, and have some very valuable scientific evidence leading me to conclude that Darwin wasn’t a quack. But you must read on to make your own decision.

After the completion of the race, I was forced to gloat on the only small victory I could muster, by looking trough the rosiest glasses I could find. My ass didn’t hurt. Not at all. Not even a little. In comparison, the rest of my biking buddies were in varying degrees of pain ranging from mild discomfort to absolute agony. One gentleman in particular was dealing with an exceptionally horrendous case of chafing. Now I’m not talking a little butt rub, but rather a complete loss of numerous layers of dermis, in rather large areas from both cheeks. Painful for Jason…hilarious to me. Believe me; I reveled in his misery as only a good friend could. If you can think of a butt joke, so did I, and I cast it in Jason’s direction without mercy. All the while laughing at his misfortune. I took enormous pleasure waiting outside, within earshot, for Jason to start his post race shower. The squeal of pain he yelped as the first water hit the raw flesh had me giggling uncontrollably.

Through out the rest of the night, while downing my first beers in months, actually my first 7 beers in months, the butt jokes kept on flowing and I was on a roll. I crawled into my sleeping bag at 10 PM giddy from grog, exhausted from riding and still chuckling at Jason’s plight.

The bike gods did not condone the joy I had found in the misfortune of a fellow rider. Karma was out to get me. At about 2:30 in the morning I began to uncover their revenge. I rolled over from a sound sleep to realize something was amiss in my nether regions. In an alcohol-induced fuzziness, I slid my hands down below to figure out what was happening. WOW! I’ve got three nuts! How cool is that? And I dozed back off to dream of my newfound uniqueness. Somehow in my convoluted dream state, I had managed to rationalize my new third testicle as a great advancement in the evolutionary chain. Opposable thumb…walking erect…three stones. Someday all of this new species will have three. The name of this new super species will be…Homo erectus tritestes. I was further anticipating women with three nipples, but I digress. That was a separate dream and not really part of my thesis.

Unfortunately by 3:30 a blistering pain in the proximity of my new super nut rudely woke me. My claim to fame was nothing more than a gigundus saddle sore. That’s right a cyclist’s cyst. A biker’s boil. A peddler’s pustule. I’m not prone to exaggeration; I’ll not say it was the size of a softball or orange. But it was every bit as large as a golf ball. I’m pretty sure it could have won the county fair, butt believe it or not…no one wanted to see it.
Posted by Pale and Scrawny at 1:45 PM No comments:

Free Beer For Everybody!

Ok. That's an exaggeration. But I did give away over a case of my first batch of home brew. It turned out pretty well. I made an American Amber Ale. It's a pretty full flavored beer that has actually gotten a little mellower after being cold conditioned for a couple days. (Stuck in the fridge) As many of you know, a beer that is actually designed to taste like something versus the major US brands which are brewed with the primary intention of offending the fewest people, tastes considerably better after being poured in a glass. This beer is no exception. Several people have asked me to name a beer that tastes similar. Well the best I can come up with is a cross between Sierra Nevada and Fat Tire. Not quite as bitter as Sierra Nevada and maybe a touch softer than Fat Tire. All in all not a bad first effort. If you stop by (and if there is any left) I'll gladly pour one for you.
Posted by Pale and Scrawny at 6:40 PM 1 comment: