It was a beautiful early summer day and I was ripping around Laurel Mountain on a sweet new ride, pretty sure I was KING OF THE WORLD. I’m was tearing down one of my favorite trails in the state, Wolf Rocks Loop, having a blast.  I am RIPPING on one of the small gaps in the trail, that aren’t choked with stones, rocks and boulders. I came into a slight rise and lift out of the saddle to power over a bit of a crest. Out of the corner of my eye, I catch sight of a sapling that has been bent down by one of his bigger neighbor trees falling on him. Being a bit slow to react, I realize that the limb is gonna hit my bars and hopefully just brush aside. But I brace for the impact. 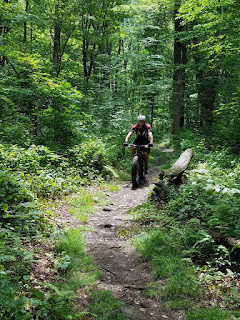 It’s about this time things shifted into SLOW MOTION.  As the limb hits the bars, it slides sideways and gets hug up on the brake mount. Instantly, I can feel the tension build as I’m moving forward and the limb is loading energy. But there’s no place for it to go since it’s wedging against the mount. Now anyone who has spent some time riding a bike in the woods, KNOWS that catching your handle bars on something almost always involves a superman move out and over the bars, with the rider landing hard typically on a rock.  I’ve been there, done that, and bought the tee shirt. It hurts, so I react and instinctively throw a hard right cross into my bars to resist the inevitable ejection.

IT WORKS!  I’m not going over that bars, but soon wish I was. That sapling, that had bent into the shape of on a over exaggerated C, has stored and now is about to release a massive amount of energy. Due to some bizarre twist of physics, my body position and the laws of Funniest Home Videos, that tree snapped back with enough force to lift me off of my bike and send me hurling backwards. Unfortunately, the point of impact was, about as square a blow as I’ve ever encountered, to my man parts.

I was lying there writhing in pain, in the obligatory fetal position, when my buddy rode up and said, “What the hell was that SOUND? I thought somebody smacked a watermelon with a wiffle ball bat.”