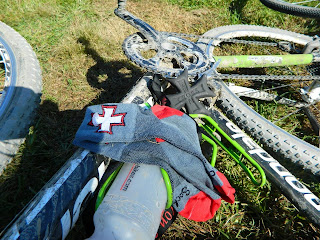 I kind of knew going in that I was not fully prepared to tackle this race. But parts of it are so much fun, that kind of like child birth you forget how bad the rest hurts and agree to give it another shot. Since almost ALL of my training and racing this year has involved shorter more intense efforts, I knew that 5 hours of cross racing was going to hurt. The only question was how much.

Well about half way up the first of two massive, straight up, bike on your shoulder, one hand on the ground, 10-15 minute hike-a-bikes, I got an inclination. My right quad began to tremble and looking down between gasps, I could kind of see something moving under my skin. Being near the point where a stray hallucination could easily be absorbed and dealt with, I kept trudging up the seemingly endless climb. Lift left leg to the rock 18” above, jerk yourself up and look for suitable purchase for the next step with my right leg. Now repeat a thousand times. Man a couple months doing stair climb training would really pay off now. About 3/4’s of the way to the top of runup # 1, I can feel the quad on my left leg trembling a bit. Kind of a fairly unpleasant tearing feeling followed by pulses of deep muscle aches that jump between my legs, like voltage leaping between the sides of a light filament, for the duration of this scramble and the subsequent next hike-a-bike. I am starting to feel that something is in me. Something I cannot control. Something that wills me tremendous harm.

These feelings and the accompanying foreboding are intermittently present over the next hour or so of the race. When the feelings subside, I am able to push the pace some and move up amongst my fellow racers. When these feelings creep back, I’m forced the ease off and give back those hard won places. Somewhere around hour 4 I’m climbing a gradual fire road climb and having a push thru moment. I am catching and passing some riders and feel the urge to put a little more effort into each pedal stroke. As I catch and pass another rider, I look to my left and his face almost turns inside out and goes ghostly white. His face is twisting in ways I was unaware a face could contort. His eyes were almost out of their sockets and his lower jaw looked to be getting yanked behind him. It was about this time that he erupted and I knew he had been possessed. “DEMONS BE GONE!” he screeched. “GET OUT OF MY LEGS YOU BASTARDS!” That’s right, the devil’s minions had worked their way into his legs and were consuming the muscles from the inside out.

I had to escape. Get far enough away so the evil spirits could not latch onto me for the purpose of eating my flesh. I stood on my pedals with tremendous force, in what would be a vain attempt to outpace the monsters in his legs. I felt a slight pin prick on the inside on my right knee. Pedal faster! Escape! Then a squeezing pinch on the inside on my left thigh that started as a warm pressure. That warmth quickly exploded into all out raging fire that was scorching the muscle that runs up the inside of my thigh. The flying devils had made the bridge from my suffering biking compatriot to me. I was scared. Pain erupted from both legs in various places for the remaining hour plus. My only hope for true salvation was to reach the finish line and administer the Iron Cross Medal to my legs in order to exorcise these fearsome demons.

Somehow I managed to struggle my way across the line after 5 hours of battle. Sweet salvation now only feet away as a lovely lady handed me my commemorative exorcism cross under the finish line banner. My beautiful wife awaited me as I collapsed in the grass. The medal held tightly in my hands in the hopes that it would banish the spirits once and for all. Little did I know that pain felt during the race, while the spectres eagerly consumed my flesh, paled in comparison to the torture I was about to endure as they ripped apart the sinew, muscle and skin to escape. I sat upright in an effort to stand. ALL the demons tried to escape simultaneously. My quads, hamstrings and groin were all under attack as the demons worked diligently to make sure I would never forget and always respect their presence. I collapsed on the ground. As I lay in the grass writhing in pain, fighting back tears, Brian tried to explain to Maria that I would probably live and was “experiencing” muscle cramps. The hell I was….I was bringing my own personal demonic possession to an end!

Some highlight video below...